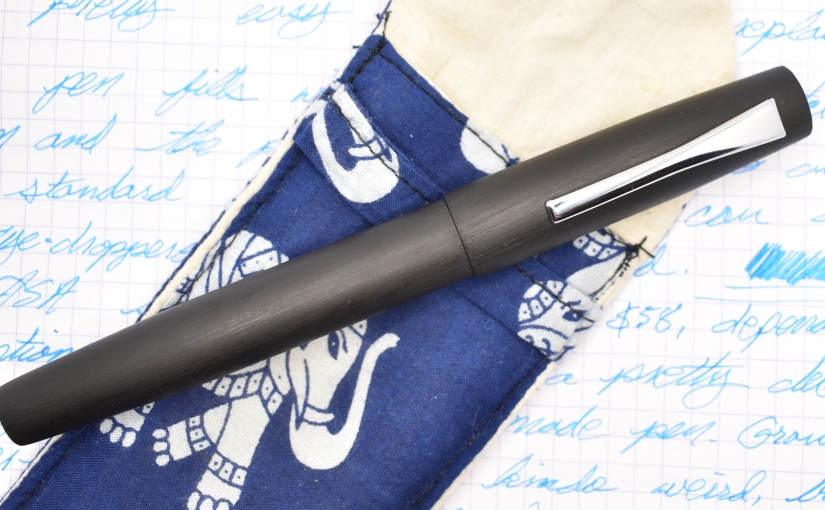 At one time, I decided that I had to have every pen with a hooded nib and I had an affinity for oversized pens. Conveniently, the Sniper is both.

It is made to order in India by ASA. It took four months for my Sniper to be made, which sounds like a long time, but it is fairly quick for a handmade pen. It arrived in a lovely cloth pouch along with a free Click Falcon, which was an unexpected and pleasant surprise.

This pen is quite unique–like an enlarged cross between a Lamy 2000 and a Parker 51. Under the hood is a modified JoWo #5 nib unit, which allows the user to switch nibs, although the process is more complex than with an open unit.

The body is a matte black brushed ebonite, although ASA’s website has other options available.

Being oversized, the pen has a nice, fat section. This, along with its light weight, make for a comfortable writing experience. The pen technically posts, but it becomes hilariously long and somewhat unwieldy, so I don’t personally do that.

The clip is plain and functional. The fit and finish of the pen, overall, is quite nice–no seams or rough spots, the threads are smooth, and so on. The hood on mine is very slightly asymmetrical, which may really bother some people but I’m willing to give it a pass because of its handmade nature.

I personally wasn’t really impressed with the #5 nib, but it was acceptable out of the box. The beauty of JoWo nibs is that they are ubiquitous and cheap, so the end user can practice nib adjustment without fear of destroying some rare nib or replace them as they see fit. Like all hooded nibs, the hood has to be removed to work on the nib beyond a few simple adjustments, which adds extra steps to the process that may be fairly intimidating for beginning users. The customer service at ASA did impress me, though, so I’m sure they would be accommodating to a customer should they receive a defective nib. That said, the owners are fountain pen people so your pen gets tested before being shipped to you.

Because of the nature of this pen’s design, it can fill from a converter, but excess ink in the hood can get a bit messy, and the converter doesn’t really fill fully. This is not unique to the ASA Sniper–I have other hooded pens that suffer the same or similar issues. This is typically resolved by inverting the pen and expelling air from the converter then filling it again followed by a liberal application of a napkin for excessive ink. If the user prefers eyedropper filled pens or cartridges, this is a non-issue. Either way it’s worth consideration.

Finally, the cap doesn’t have an inner cap to speak of, so the nib dries out a bit when left unused.

Overall, I’m impressed by what I received from ASA, especially given the price–$58 shipped. The pen is quirky to be certain, but a great value, especially considering that it’s handmade and a semi-custom piece.