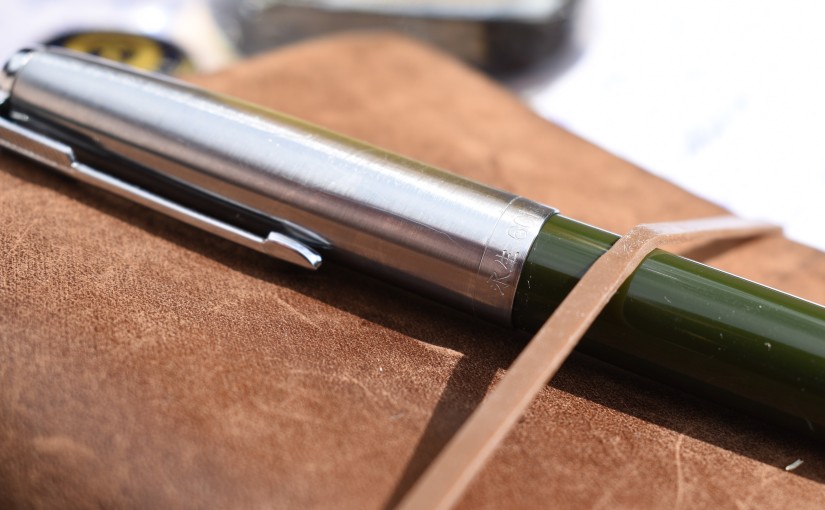 I’ve been putting this review off for a long time.

It’s not that the Wing Sung 601 is a bad pen–it’s not. I quite like it, for what it is. There just isn’t that much I can add that hasn’t been said already, and there wasn’t that much to say about it from the start.

I’ve had a lot of Parker 51 clones pass through my hands. The Wing Sung is the best of those, and is a pretty good price to boot. Actually I’d go ahead and say that if one is looking for a cheap P51-esque pen that works and doesn’t break the bank, look no further.

Is it “better” than a vintage Parker? Nope. Not even close. Is it “better” than a Hero 616? Yes, by a long shot. The question of “good, better, best” is subjective, of course, but unlike the numerous Hero pens, one can be reasonably assured that their Wing Sung 601 will probably work out of the box.

The 601 is available in six or seven different colors for around $20 shipped. For 20 bucks, the user is getting a pen that is fairly well built, writes pretty well, and fills via a vacumatic system with a monstrous 1.8mL ink capacity. The only self-filling pen I have that exceeds this capacity is the Pilot Custom 823, and that only does so by 0.4mL. The very fine nib makes that capacity last for quite some time between refills. Mine is a true vacumatic filler, but newer 601’s have a different mechanism that is somewhat of a cross between the Parker vacumatic system and an Edison draw filler–functionally they’re the same, but in theory the newer system should be less likely to fail in the future, either from age or the use of inks that aren’t latex safe. 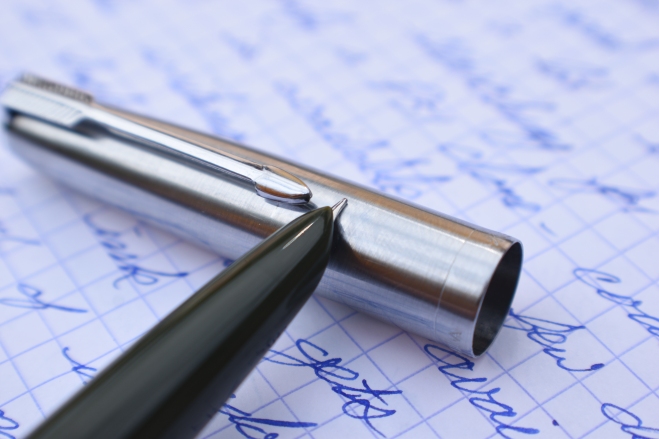 The reason I didn’t want to write the review isn’t because I don’t like the Wing Sung 601–I do like it, as I said already. The pen is just uninspiring. It doesn’t bring anything new to the table. It’s a copy of an 80 year old design. It’s probably the best of the copies, but the quality of the materials and the fit and finish of the pen cannot stand up to a Parker 51–as I’ve said before, this isn’t a fair comparison because the 51 retailed for over $250, adjusted for inflation, and this is a $20 pen.

And unlike its cheaper competitors, I can’t even tell a cool story about how I had to buy 15 of them just to get an authentic one that didn’t even write–I bought it off Amazon, it came in a rip-off Lamy box, and it worked fine. I’m not complaining–it’s definitely worth the extra money over most P51 clones–it just makes for a boring review. 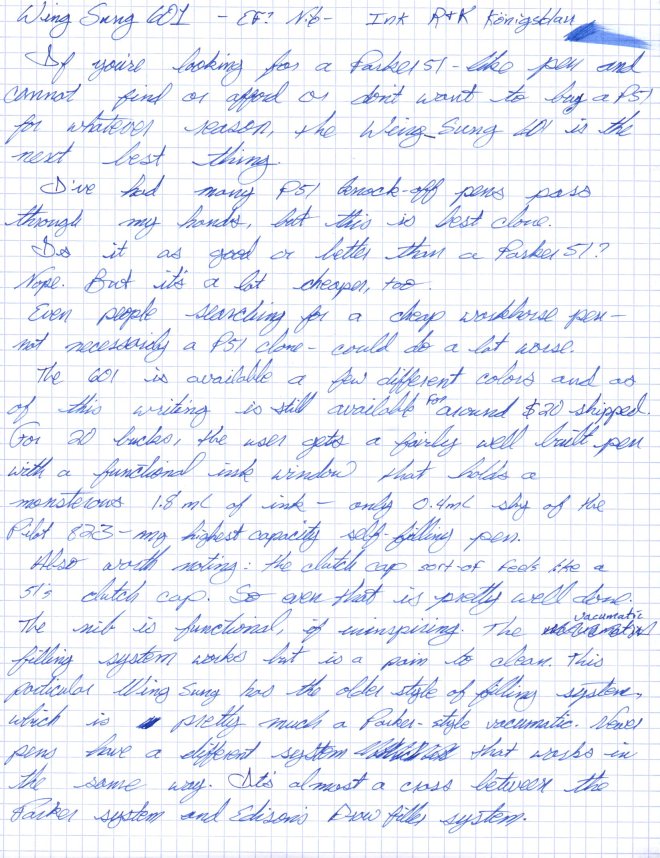 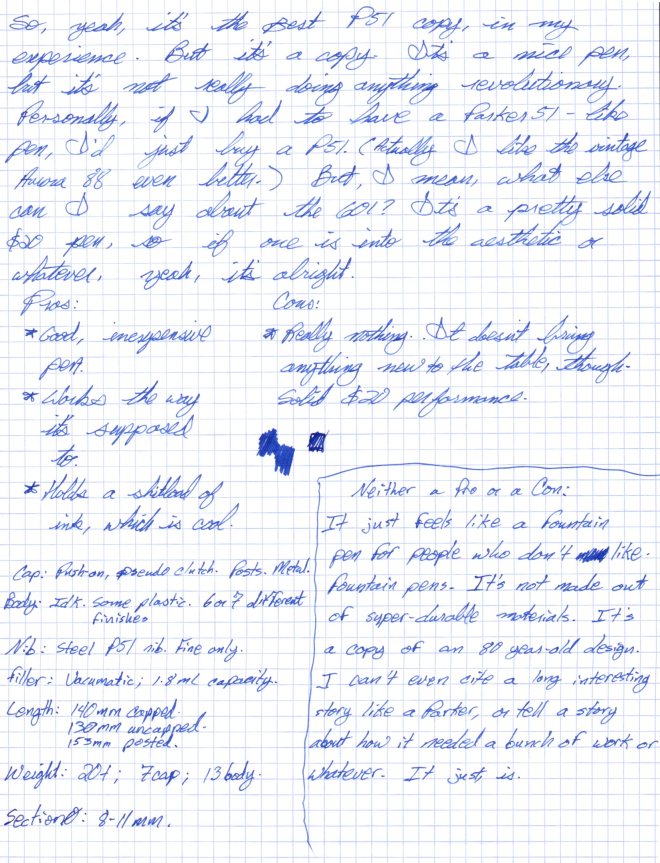 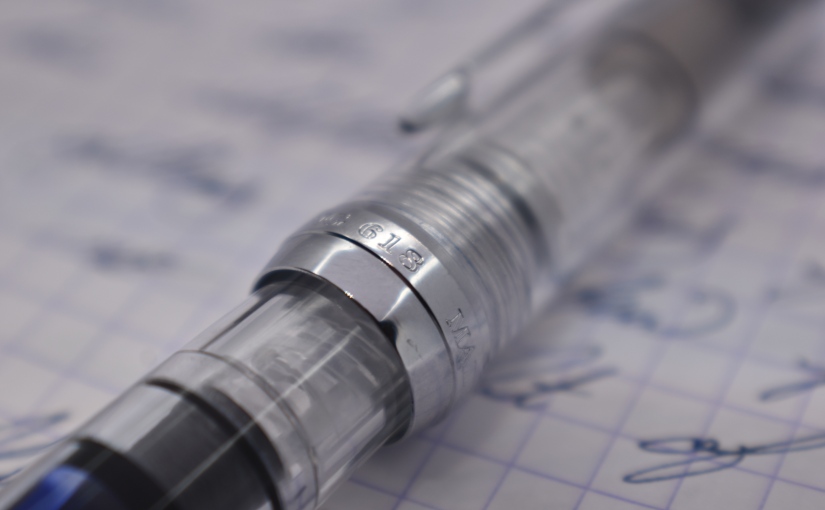 I’m usually behind the times when it comes to pens from China. There’s a lot of cool stuff coming out of China, but I’ve shifted away from buying a lot of fountain pens to buying a few pens that I really want every once in awhile so these offerings tend to get neglected. That’s no fault of these pens, though.

In fact, I quite like my 618. It’s not the best pen ever. It’s actually far from it–the clip is cheap, I had to fiddle with the pen to get it in order, and it tends to have sporadic–although acceptable–ink flow. But it’s just kind of quirky and I like it.

It’s sort of a TWSBI/Parker 51 hybrid with a subtle nod to Sailor in the cap band design, all packaged in a Lamy box. I’m not the first reviewer to point this out, of course, but it just sort of works for the Wing Sung in a weird way. Frankly, had they omitted the fake clutch ring on the section and used a different clip design, one would be hard pressed to call this pen a true Parker 51 clone because it’s just different enough. The 618 is a demonstrator, has a screw cap, and is a piston filler–Parker never did that. I think Wing Sung missed an opportunity to create something wholly unique, but that’s just me.

My 618 has been modified. It wrote fine after some adjustment/tinkering when I received it, but I eventually replaced the nib with a fake Hero nib and shellaced the section in place. It didn’t need shellaced per se, but it came untwisted on me once and I fixed it.

The story behind this nib is perhaps more interesting than the pen itself: I was sold a “Hero 100” with a “10k gold nib” but the pen I received was by the far the most ungodly abomination of a pen I’ve ever held in my hands complete with razor sharp edges and rough spots. It didn’t fill well and broke almost immediately, but the nib was pretty good. I was convinced that I had a gold nib, so I removed it from the destroyed fake Hero and transplanted it on the 618.

The process of removing the nib from the original pen also removed the cheap plating on the nib, revealing its true nature–a steel P51 style nib. But it’s still the nicest example of one of these nibs that I’ve come across yet and I swear that it is properly tipped and not just folded, polished steel. Whoever made this nib did a pretty decent job, even if they skimped on the plating and put it on a trash counterfeit pen in an attempt to swindle people.

A big selling point for this pen is the low price–they’re still going for less than $20, as of this writing. It isn’t the most plush fountain pen in existence and it may need some fiddling to get working, but one can be reasonably assured that they’re getting a pen that will work, even if it takes a little tweaking to get there. Some of Wing Sung’s cheaper competitors barely produce approximations of pens, let alone functional pieces. If the user wants a pen that has been QC tested and is ready to write, the 618 may not be it, but it’s a fair bit cheaper, too. It’s a nice compromise that way.

Of course there are pens that are both cheaper and basically write between good and perfect out of the box nearly every time, like the Platinum Preppy or Pilot MR, but those aren’t piston fillers, either. It comes down to user tastes at the end of the day.

The Wing Sung 618 is extremely popular, so there isn’t much else that I can say about it that hasn’t been said before. It’s quirky. I like it.