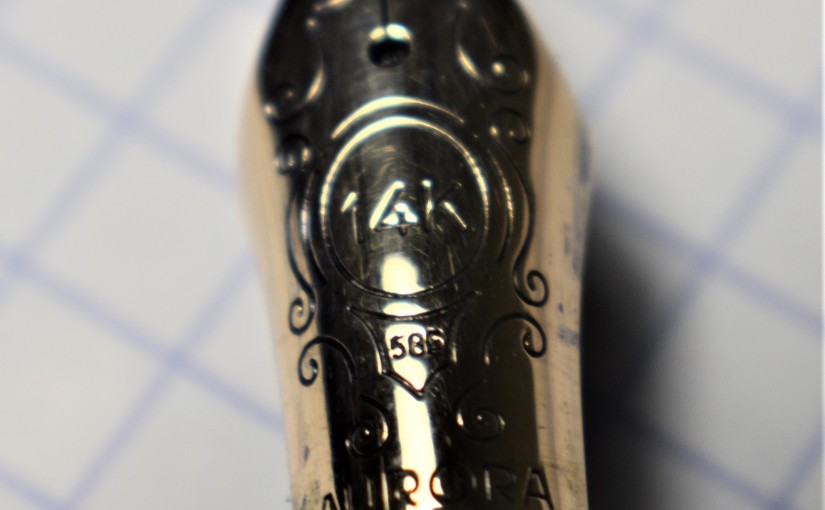 When I started this blog I said that I was going to review my pens in roughly the order I bought them.

We’re taking a bit of a detour because I cannot wait anymore. I have to write about my modern Aurora 88.

Before this pen, I was exploring what I liked about fountain pens and I acquired a bunch without any real direction. I went through a try everything phase, then an oversize phase, followed by a hooded nib phase. The Aurora 88 is none of those things (the modern 88 isn’t anyways).

I knew about Aurora as a newbie, of course, but I was pretty nervous about their reputation for having nibs with feedback, and they seemed fairly expensive–relative to the Delta Dolcevita Oversize, Pelikan m1000, Yard-O-Led Viceroy Grand, and other pens I’d bought, Auroras aren’t really any more expensive, but I wasn’t sure about them. I found this 88 used on the Peyton Street Pens website for a good price, and decided I’d give it a shot.

I wish I’d bought the 88 first. Or maybe not because I wouldn’t have bothered buying any other pens. The Aurora 88, to me, is The Pen.

Not “my grail pen,” no, I have a different pen in mind for that–the 88 is The Pen. I cannot tell you what The Pen is–it’s a feeling, a state of mind. It’s the instrument that checks all of the “Yes” boxes and none of the “No” boxes. It feeds your soul, whether by the company’s story, the product itself, the writing experience, or (more likely) some combination of those things. A grail pen could be The Pen, but I don’t think they necessarily are the same thing. If you could only have one pen, The Pen is it, and the humble (by Aurora’s standards, anyways) 88 is My Pen.

It’s a perfect fit for my hand. It’s classy and beautiful. The nib? Perfection: wet, smooth, and with perfect feedback. On premium paper and with a wet ink it’s a smooth, luxurious writing experience. On the other hand, I can tame the medium nib with a drier ink like Rohrer & Klingner Salix to write smaller or on crappy paper, so it’s adaptable to either writing bold and beautiful letters or small, precise every day writing. No skipping, hard starts, or drying out. The writing sample is done in R&K Salix, but my favorite ink to use with this pen is the beautifully dark, velvety Aurora Black–Aurora Black is extremely well behaved given how wet and lubricated it is, and the combination is simply divine, especially on a premium paper like Rhodia, Midori, or Tomoe River.

The pen is a piston filler. I measured 1.4mL capacity through my usual measurement technique. It does have the “magic reserve” feature, which is supposed to keep a little bit of ink in the piston and allow an extra couple of pages of writing by fully extending the piston, should one be caught without enough ink. It’s sort of a gimmick, but it works as intended. The ink window is subtle but functional.

It doesn’t matter if the 88 is used posted or unposted because the balance is perfect. Some pens feel like they need to be posted and some feel better unposted but it doesn’t matter with the 88–although I almost always post it. Through some Italian wizardry, the 88 somehow manages to be shorter than comparable pens when capped, longer when unposted, and roughly the same length as its peers when posted, so it fits in any pocket or pouch, feels substantial when not posted, and remains comfortable when posted. The long, tapered section helps with writing comfort.

Auroras are entirely made in house in Turin Italy and their nibs are unique–ground finer than German equivalent but perhaps not as fine as equivalent Japanese nibs.  The feedback of Aurora’s nibs is a grossly over-exaggerated topic, in my opinion. The nib isn’t perfectly smooth, sure, but it is far from scratchy. Like I’ve said before, a nib can have feedback and be smooth because feedback is an audiotactile sensation whereas scratchiness is a defect. When I was a newbie, this distinction was not very clear and it’s scary to think about buying an expensive pen that one won’t like, which kept me from pulling the trigger on an Aurora. It turns out that I love feedbacky nibs but not everyone will. I think Platinum nibs are the closest to Aurora’s in feeling, so I would recommend that newbies try a cheaper Platinum first to get an idea before dropping serious cash on an Aurora. The other alternative is to order Auroras from a nibmeister who can adjust the pens to have less feedback. That said, all of my Auroras except one have written perfectly out of the box, and the one weird one was pretty close to perfect.

I swear, I am being paid by neither Aurora nor their American distributor Kenro (although I’d be happy to review some new Aurora stuff, hit me up guys!) I discovered my love for Aurora independently and my fountain pen collecting has largely shifted to Aurora, both vintage and modern, because of the Aurora 88.

If I was forced to say anything bad about the Aurora 88, it would be that it can be a chore to clean the pen because of the magic reserve feature. This can bother some people–I don’t care–but it’s worth mentioning. Another point is that I’ve found Aurora’s ebonite feeds to be wholly incompatible with pigmented inks like Sailor Kiwa-Guro. It seems like the narrow feed channels cannot handle the particulates in these inks and it leads to poor performance and clogging regardless of flushing, at least in my experience. This isn’t a ding on Aurora per se as they are not advertised to be compatible with these inks nor are these inks designed to work in Aurora pens specifically, but I would stay away from shimmer or pigmented inks with these pens.

I am a fountain pen enthusiast. View all posts by MatB